Colors that we normally have available in stock: Beach House, Bungalow, Tuscan Villa.

Before installing your FIBERON decking, store the boards on a smooth, flat surface, not exposed to the sun. Ideally, store the material near the installation site for at least 24 hours prior to the installing it to allow it to become adapted to the environmental conditions of the site.

The base for the support structure can be prepared using a layer of mortar or another type of base such as concrete, brick or metal structure. An adequate drain should also be provided under the decking support structure to properly allow rainwater to drain. It is important to note that the deck and supporting structure should never be exposed to flooding. The keels where the FIBERON decking boards will be layed on must be installed at a maximum distance of 31.5cms (from center to center of the keel) and must be straight (must not have any inclination).

Like other building products, FIBERON decking boards contract and expand as temperature changes. For this reason it is important to leave an adequate spacing between the boards. Follow the spacing provided according to the Expansion table (See section “Expansion Table” below).

In hot climates, the boards should be cut under a shade and as early in the morning as possible to prevent the heat from expanding them. If the boards have been exposed to heat or the sun, they will be expanded (elongated). Cutting the boards under these contidition will lead to problems in large gaps between the ends of the boards after the product has been installed.

Additionally, note that when placing the ends of the boards against rigid elements such as walls; a distance of 1cm should be left between the end of each board and that particular element (For example: wall) The boards should never be glued on to each other.

*Failure to follow any basic installation standard or recommendation will void the limited warranty. 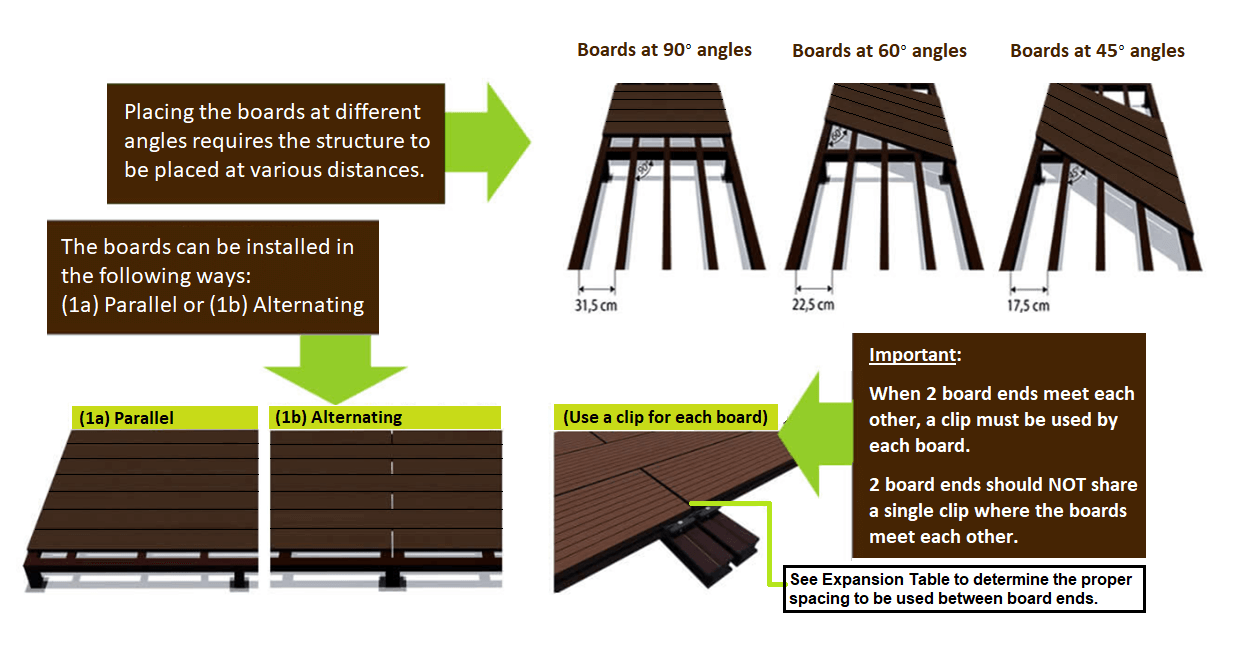 1) Center and screw the (Metallic) Starter Clip on to the keel. (Leave a gap of at least 1cm between the head or end of the keel and any vertical element (walls, gates, entrances, etc.).

2) Repeat procedure 1 on each keel. (All keels must have a Starter Clip to hold the board).

3) Position and fit the side slot of the first board to the lip of the Starting Clips.

4) Once the first board is in place, screw a Plastic Clip to each keel to securely fasten the board to the frame. To avoid damages, first insert the clip by hand and then screw it on to the keel. The Plastic Clip should not be screwed on too tightly as this would prevent the board from moving freely with temperature changes and could damage the material.

5) Attach the second board by fitting the side slot of the board to the Plastic Clip.

6) To ensure a smooth finish, it is important that each clip fits properly into the slot on the side of the board. Never hammer the clip against the board or leave it too tight between boards. The clips will ensure that the proper distances between the sides of the boards are kept.

7) Pay special attention to the gap points in the head or end of each board. The separation between the end of one board and the beginning of the following board may vary depending on the type of climate of the location where the products will be installed. For more details consult your commercial or technical advisor who will gladly be ready to help you!

Installing The Last Decking Board

To install the last board or final edge of your deck, place the board (or required boards) in its proper place and proceed to pre-drill each board and then insert the screw. Pre-drilling each board will allow for expansion and contraction as temperatures change without damaging the screws or boards. When using a plastic keel, be sure to pre-drill. Once the board and keel (if required) have been pre-drilled, proceed to screw each one directly to the keel as shown in the photos below.

Installation of the Skirts or Fascia boards

The skirts or fascia boards should be screwed directly on to the structure or keel (not directly to the edge of the decking board).

It is very important to pre-drill these pieces (Skirts/Fascia boards) before screwing them on to the structure or to any wall. 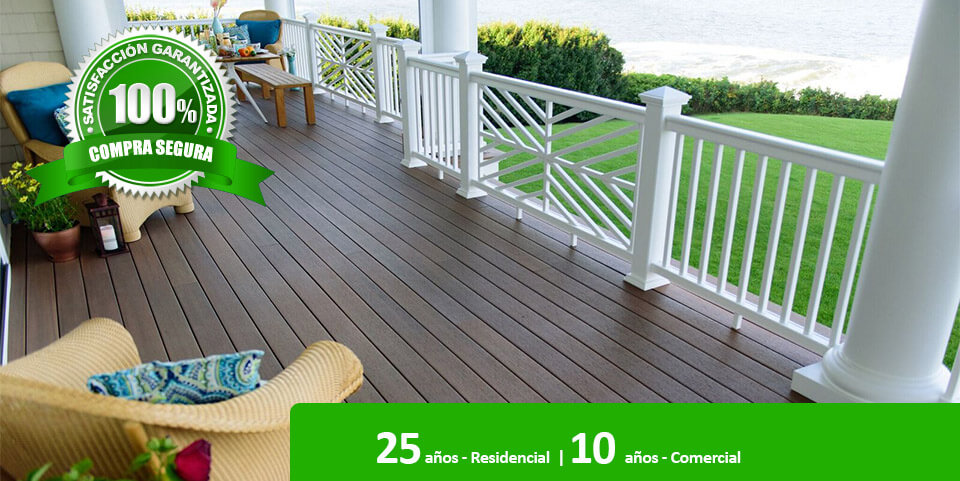